When 5 high society Southern Belles decide to become mail-order brides, they head to the wilds of Montana and find a little bit of Christmas magic.

Read all about these books below, then click the Amazon button to pre-order your copy!

A Mail Order Bride, Secrets, Lies and a Christmas Miracle Five Charleston women desperate for marriage-minded men and the chance to rebuild their lives, after the Civil War answer an ad in the Grooms Gazette. Charity Kingston has to get out of Charleston or face life working in a brothel. But the past follows her to Angel Creek, Montana, revealing her Irish temper and the brothel owner’s demand for payment of her debt. After the war, Lewis Brown is given a chance at a new start in life. Taking a dead man’s identify he begins his new life as a saloon owner in Angel Creek. Imagine his surprise when a mail order bride comes with the saloon. In one twist of fate, his past is exposed, his secrets revealed and his worst nightmare confirmed. Lewis and Charity need a Christmas Miracle. 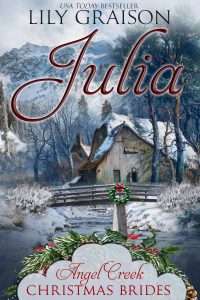 Julia Hamel always dreamed of a Christmas wedding and hers would be a dream come true if she wasn’t marrying a man she’d never met. Traveling across the country as a mail-order bride took a leap of faith, and she’s determined to make the best of her new life despite that fact her husband seems to be hiding something. But nothing she does seems to please him and Matthew’s distant despite her best intentions. When she meets a mischievous old man and takes his advice on how to make her husband happy, his ideas backfire in the worst possible ways and as Christmas draws closer, Julia begins to think leaving home may have been the worst mistake of her life.

Matthew Bailey never wanted a wife—until he saw Julia. He married her without much thought and hoped her presence would be enough to finally distract him from the fact it was the one time of year he wished he could forget. Painful memories keep him distracted and when the girl who mistook his kindness for a wedding proposal stirs up trouble, Matthew has to decide what he really wants. If its Julia, then he has to bare his soul and confront his past but dredging up those old memories is still painful. Can the love of a woman he knows nothing about be enough to make him want to live again? And will Julia stay once she’s seen the worst in him?

Five friends travel west to find love, what they don’t expect is for the storm of the century to hit Angel Creek at same time. Snowbound with new husbands can pose quite an interesting turn of events.

After the Civil War, Charleston, SC is left devoid of eligible men. Ruby Henderson and four of her closest friends decide to travel west as mail order brides to find love. Upon arriving, she instantly regrets the rash decision. Especially upon meeting her husband to be who looks more like an outlaw, than a doctor.

Trevor Collins decides to put his distrust of women aside and marry. His new bride is more beautiful then he could have imagined, which makes him wonder about her true motivation for coming west. Will his wish to be a good family man win when the ugliness of his past rears its ugly head?

Even a giving heart has its limits.

Confederate widow, Sarah Caldwell, has lost everything. Her husband. Her home. Her fortune. And now, she will lose her young daughter if she doesn’t leave Charleston before her contemptible in-laws convince a court to grant them custody. When Sarah’s four best friends decide to answer an advertisement for brides somewhere in Montana Territory, she decides to join them praying the law won’t follow.

An injured expatriate of the Union Army, Quinn Cassidy, is now the sheriff of Angel Creek. He likes the tranquility of this little mountain town and vows to protect it. But, when five beauties from Charleston step off the stagecoach, he wonders if he can. The dark-haired woman, with the little girl in tow, walked into his life and into his heart. Now, he needs a Christmas miracle to keep his new bride out of his jail. 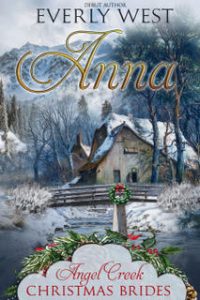 With no family in Charleston, Anna Tuttle decides to join her friends and become a mail-order bride. But she wasn’t prepared for the way her indulged life would change. And yet her rugged husband is doing his best to help her adjust to her new life as a ranchers wife. But she wants more.

Lonely, Levi Jackson orders a mail order bride, but instead of a strong vibrant ranching woman, he receives a pampered southern belle. Will she back out of the marriage before they’ve even had a chance to begin or can Levi help her learn how to love.

Will the Southern Bell let Levi show her the true meaning of family and Christmas?