Once upon a time…..I wrote a love story about a Billionaire who falls for a girl from the wrong side of the tracks. It was titled Destined Hearts and it was the first romance novel I ever wrote. It’s also a FREEBIE for every member of my Newsletter. If you’d like to read it, then head over and sign up to my list here: http://bit.ly/LilyNewsletter

Here’s a sneak-peek of the story for this week’s #TeaserTuesday. 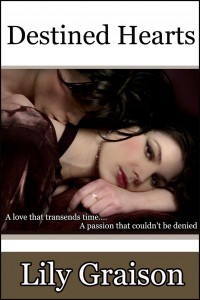 Her last thought as she left the office that morning was premature. It was now a little past noon and the office looked like a mini florist shop.

Roses in every color imaginable sat on any available surface Caitlyn could find. She had even resorted to placing them out front at the main desk.

She was overwhelmed with each new bouquet and she’d picked up the phone more than once to call him. She never made it past the first couple of digits before hanging up. Maggie’s taunting voice prickled at the back of her mind every time she tried.

She stood in the aroma filled office and looked at the sea of color, inhaling their scent when she heard Jewel let out a tiny squeal.

“Damn girl! You weren’t kidding were you?” Jewel laughed as she entered the office.

“Nope,” Caitlyn grinned. “Just when I think there can’t be any other color left, he surprises me again.”

“Please tell me you’re going to call him?” Jewel said, as she leaned down to smell the pale lavender roses sitting on the table the coffee pot usually sat.

“If I call, then he’ll want an answer about dinner and I don’t have one.”

“Why don’t you?” Jewel asked. “You want to go out with him, don’t you?”
Caitlyn glanced at her feet before looking up and shrugging her shoulder. “I don’t know.”

“You’re lying, Caitie,” Jewel said. “I’ve been your friend since fifth grade and I can tell when you’re lying.”

Caitlyn sighed and leaned back against the wall. “Maggie thinks it’s a bad idea.”

Jewel rolled her eyes and walked to the desk, sitting on top of it. “And what reason did she give?”

“She said,” Caitlyn thought hard as to Maggie’s reasons and all she could really recall was Maggie saying she just didn’t like him.

“She thinks he’s arrogant and too rich for his own good.”

Jewel made a “pfth” sound before laughing. “Girl, if that’s the only reason you’re saying no then, you’re crazy.”

“So you think I should then?”

“Look, I know I said play hard to get but William apparently isn’t your typical guy. I’ve yet to meet a man who would go to this much trouble for one date. I say call him.”

Caitlyn grinned and stuck her hands in her pockets. “What will Maggie think?”

“Is Maggie going to spend her life making you happy?”

“Well then I suggest you get off your ass and make the call,” Jewel told her. “And if you don’t I’m going to find out if he likes blondes…er, redheads or whatever color my hair is today.”

Caitlyn laughed before seeing something out of the corner of her eye. She turned her head to the door and saw an arm sticking through the doorway.

Someone held a single daisy and she grinned before looking back at Jewel. “Jesse has felt left out all day.” She pushed off the wall and walked to the door. Her smile waned as she looked up and saw William standing there.

“I have sent you every rose I can possibly find in Boston and since you haven’t called me yet I figured I was doing something wrong,” he said. “It’s not much but its beauty is in its simplicity.”

Caitlyn’s body raced with tingles as she looked at the daisy before reaching out to take it from him. It was pale pink in color and she inhaled its scent. She looked up at him and said, “It’s beautiful. They’re all beautiful.”

William glanced around the room, taking in the sight of the roses and nodding his head. “They’re nice,” he said. “But they pale in comparison to you.”

Get your FREE copy here: http://bit.ly/LilyNewsletter