The moment I crack open a new book, I always rush through the beginning, the budding relationship between the hero and heroine, and anticipate that spontaneous moment when one of them makes their move. The First Kiss. The first turning point in every story.
Every week here on the blog, I’ll be sharing First Kisses from my books and those of other authors.
This weeks Friday First Kiss comes from The Outlaw, book 2 in my Willow Creek Series.

Hearing a noise behind him, he turned his head to find Sarah standing at the edge of the woods looking at him. Damn if she wasn’t the finest looking woman he’d set eyes on in ages. He’d seen his fair share of them, too. Had more than he could count in his bed a time or two but none had compared to this one.
The others had been too easy. He flashed them a smile and it took less than a minute to get them to drop their drawers. He didn’t think it would be that easy with her, though. She was different. More refined than the women he associated with. A real lady. And more spirited than any other woman he’d ever met. This one wouldn’t lay down and let a man have his way. No, she’d want things done her way and wouldn’t be afraid to tell him how to do it. He held back a smile at the thought. He’d love to find out.
He groaned inwardly. Thinking like that was what got him in his current state. He needed to get this girl out of his system and fast. Maybe he should just let her know what he wanted. For all he knew she wasn’t as chaste as he imagined her to be. She may actually be as easy as all the others were. Somehow he doubted it but one never knew until they asked, right?
* * * *
Sarah started to ask him if anything was wrong but he turned and started walking back to where she stood. His gaze roamed her body from head to toe before he stopped in front of her. The look on his face made her nervous. His expression was lustful and hungry. Her pulse leaped, butterflies danced in her stomach, and she licked her lips as her mouth became suddenly dry. He groaned when she did, mumbled a curse under his breath and reached up, cupping her face in his hands, and kissed her. Her shocked gasp offered him entrance into her mouth and he wasted no time slipping his tongue in to taste her.
She went limp at the first flick of his tongue against her own, her body swaying toward him, and Colt wrapped his arms around her, angled his head and took everything he wanted. She was slow to reciprocate but when she did, sliding her tongue against his, his hold on her tightened, his mouth harder and more urgent.
The one kiss she’d had from William had been all lips, wet and messy, and she’d prayed the entire time it lasted that it would end sooner rather than later. This kiss… she never imagined it would be like this.
Colt tasted faintly of whiskey, his scent tickled her senses and she inhaled it, memorizing it before tentatively placing her hands at his waist. His hold on her tightened, that wicked tongue teasing and dipping until tingles raced down her limbs, causing tiny zaps of pleasure that left her weak and light headed. Small sounds escaped her throat, her breaths panted out as he fisted her hair in his hand, angling her head the way he wanted. He sucked her bottom lip into his mouth, teased it with his teeth before his tongue once again invaded her mouth with rapid plunges, the whiskers from his growing beard rasping against the flesh around her mouth until her face felt lit with fire.
She wrapped her arms around his waist, leaned against him and mimicked him, kissing him with a growing hunger that left her dazed and pleasantly warm.
He let her go suddenly, holding her at arms length. They were both breathing heavily and Sarah was stunned when he turned and walked away, back to where the horse was, without saying a word. He stood there for long moments before turning his head to look over his shoulder. “Let’s go, sweetheart. We need to keep going.”
It took her longer than it should have to catch her breath, even longer to make her body react. She crossed the distance, staring at his back, and stopped when he turned to face her. The lustful look was still on his face and something she couldn’t even put a name on lurked in his eyes. It caused those butterflies to dance again. His gaze roamed her face, stopping on her kiss swollen lips before rising to her eyes. Sarah blinked at him and shook her head. “Why did you kiss me?”

He gave her a sudden, lazy smile. “So I’d stop thinking about doing it.” He reached for her, wrapping his hands around her waist and lifted her to the horse. He put her in the saddle this time and climbed in behind her. She wiggled her bottom to give him more room and gasped when his arm clamped around her waist and he pulled her back into his chest, his head lowering until his breath was warm against her ear. “And if you don’t stop wiggling that ass around on me I’m going to do everything else I can’t stop thinking about, too.” 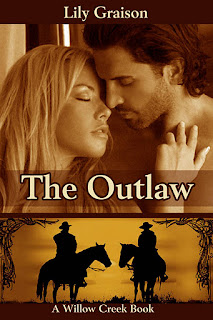 Sarah Hartford always dreamed of a grand adventure. She just never expected to find it in the arms of an outlaw.

When her father’s bank is robbed, Sarah doesn’t make the gunslingers’ escape easy. Putting her own safety behind those she hopes to protect backfires when she’s kidnapped by one of the escaping men. Now her only hope for survival lies with the same arrogant man who laughed at her while staring down the barrel of her gun.

Colton Avery spent months planning the perfect heist, every detail fine tuned and executed with precise timing. Nothing could go wrong. That is until he comes face to face with a determined woman holding a shotgun. She aimed at his head and never flinched when she took a shot at him. He wanted her the moment the smoke cleared and he saw her face.

Robbing the bank, and handing over the gang of notorious outlaws to US Marshals, would be routine and boring. Sarah Hartford made it anything but. Taming the woman who stole his heart the instant he saw her was a challenge he was more than willing to take on. All he has to do now is escape the gang of outlaws he just double-crossed, hideout from an Indian raiding party and elude the town marshal who just happens to be his little hellion’s new fiancé.

BUY THE PAPERBACK FROM: