Annie was both frightened and exhilarated. Michael’s hands urgently framed her face, then slowly gentled, sliding lower to caress her throat. He explored the curve of her neck with a sensuous stroke, finally thrusting his fingers deep into the soft, thick tresses of her hair. Still he couldn’t stop the restless motion of his hands. He tugged Annie tightly against him and fairly devoured her lips with his. Her heart raced wildly and she could scarcely breathe.

When her lips parted slightly, he teased her with his tongue, then thrust deep, exploring the sweet, seductive taste of her mouth. Her hesitant surprise dissolved first into a glowing pleasure and then, so quickly it stunned her, into something else altogether more urgent and hungry. A deep craving flared as she instinctively understood all his kiss was asking of her, all the desperation with which he was taking her.

Michael wanted comfort, absolution, warmth. He wanted life. He wanted everything she could give.

Annie wrapped her arms around his neck and pressed her body against him as a low moan escaped her throat.

Michael was jolted from the haze of his desire by that small, urgent sound. As Annie’s arms slipped around his neck, her fingers grasping his hair to urge him even closer, he was shocked to realize he was about one second away from laying her down on the porch and taking her right there. The softness and heat of her body, sweet and warm even under the layers of her clothing, pressed hard against him. His heart thundered in his chest.

Convulsively he pulled his hands from Annie’s hair and again held her face in his palms, drawing back slightly and gentling the passionate kiss, then breaking it. He leaned slightly against her, breathing hard, touching his lips tenderly to her forehead as he listened to her soft, rapid breathing.

In all his life, Michael had never felt so raw and exposed. He trembled from the power Annie held in her sweetness, strength, trust, and passion to shake him to the very core. The unexpected fire of her response had nearly undone not only his every ounce of physical resolve, but his heart and soul as well.

Southern tradition made much of flowery, maudlin sentiment, and Michael had always easily distinguished lust from romantic love. He knew from experience that one involved getting right down to scratching the itch, but the other, he surmised, involved a great deal of sighing and pining and God knew what else. What was happening to him now stunned him completely.

He’d known the first moment he’d ever touched her that he wanted Annie, and therefore he expected to have to keep holding an iron rein on his lust. He just hadn’t expected to be shattered into such sharp need, tenderness, desire, vulnerability, and power all at once, then to be put back together with an awful lot of pieces in the wrong places.

“Annie,” he whispered hoarsely. “Annie, you’re so damn beautiful, so sweet…Aw, hell, sugar, if we don’t settle down here, I’m gonna come all undone and start teaching you things I got no right even thinking, much less doing.”

She looked up into his eyes, gone dark as a moonless night sky. She shook her head in gentle denial and reached up to tenderly trace his mouth. He shuddered and sucked in a breath, then gently closed his hand over hers, lacing their fingers. He pressed a kiss over each of her fingertips.

He understood instantly what she was saying, and something very male inside him was foolishly, inordinately pleased, as well as gut-wrenchingly relieved he hadn’t ravished her on the front porch after all.

“Annie.” He had so much inside of him to tell her that he couldn’t even begin, but she heard the fullness of his emotion in the way he spoke her name.

She smiled a little giddily at him, then giggled. “When Andy Carlisle from out Arapahoe way kissed me last summer, I hit him.”Michael’s eyebrows arched, both in amusement at the instant mental picture he got of Annie whacking some poor, besotted cowboy, and in sudden, intense jealousy. She was far too lovely to have never been kissed, but he purely hated every boy or man who’d ever touched her.He cleared his throat, but his voice remained raw. “God, Annie, I’ve wanted to kiss you for so long, ever since that day you rode with me on Jet. You darn near drove me insane.”

Annie’s eyes widened and she gasped, killing him sweetly.

“You fixing to haul off and smack me?” he grinned crookedly, not entirely certain she wouldn’t do it, thinking they both might be better off if she did.

“Maybe I might,” she murmured, her gaze fixing helplessly on his mouth. “Unless of course, you kiss me again.” 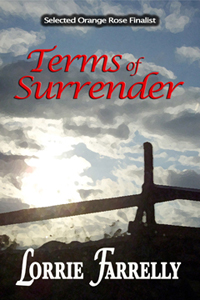 The War Between the States not only destroyed all Michael Cantrell loved, it left the former cavalry officer without faith or hope, a solitary, haunted man trying to escape his demons in the vast western frontier. Then, one spring day along the Wind River, he finds himself suddenly in the thick of another life-and-death struggle — rancher Annie Devlin’s war.

Reluctantly, Michael, who for years has known only loss, allies himself with a stubborn, courageous young woman who will take his heart by storm and test the limit of his honor, his mettle – and his passion.

To purchase this book, or see the complete list of Lorrie’s books, visit the Amazon store. 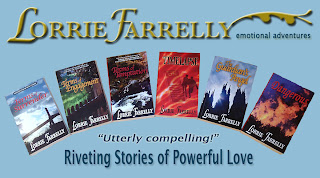 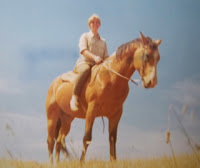 “Writing Western historical romance, contemporary romantic suspense, and time-travel/alternate universe/romantic adventure, LORRIE FARRELLY is proud to be a Navy brat and a graduate of the University of California at Santa Cruz. She’s a 3-time winner on Jeopardy! (despite forgetting the chemical symbol for sulfuric acid – oh, wait, she never knew that in the first place). She has shepherded wide-eyed foreign exchange students along Hollywood Blvd (“As many stars and lunatics as there are in the Heavens”), and she has happily curried and shoveled as a ranch hand at Disneyland’s Circle D Ranch. And always, she writes.

Lorrie has won a Presidential Commendation for Excellence in Teaching Mathematics. She’s been a Renaissance nominee for Teacher of the Year and a finalist for the Orange Rose Award for romantic fiction. She’s never won the lottery, except where her family is concerned. For her, they’re the ultimate treasure.”