The moment I crack open a new book, I always rush through the beginning, the budding relationship between the hero and heroine, and anticipate that spontaneous moment when one of them makes their move. The First Kiss. The first turning point in every story.
Every week here on the blog, I’ll be sharing First Kisses from my books and those of other authors.
This weeks Friday First Kiss comes from The Rancher, book 4 in my Willow Creek Series.

Holden was half way down the street before he stopped, turned around, and walked back to the school house.
Since the moment Laurel had slammed her door in his face, he’d gone over everything Morgan had learned about her, and told him about, and every piece of information he was able to get from Laurel himself and none of it explained why she was so stand-offish at times.
Or why he got the impression her surly attitude was all an act.
She confused him more often than not and tonight was no exception. It had been a long time since he’d courted a woman and from what he remembered, there were certain things one hoped he got at the end of the evening. A kiss goodnight being one of them. A kiss he’d been anticipating until Laurel shouted goodnight to him and slammed the door in his face.
He’d seen her gaze linger on his mouth as they reached the room behind the schoolhouse and that was all it took for his cock to take notice and jump alive as if a hot coal had been shoved into his pants. He hadn’t made his intentions of courting her be known yet, but by the time he left town tonight, Laurel would know it.
Rounding the school house, he didn’t stop until he was on the little stoop by her door. He knocked, the sound loud in the surrounding stillness and when Laurel opened the door, her shocked gaze landing on him, he was near shaking with the need to have her.
She’d let her hair down, all those glorious curls dangling down her back and framing her face so perfectly, and he almost forgot why he’d turned back around and banged on her door as he stared at her.
“Holden? Did you forget something?”
He forgot something all right. His manners. “Yes Ma’am. I do believe I did.” He reached for her, weaving his fingers into her hair and pulling her toward him, kissing her without another word, her shocked gasp giving him the entrance into her mouth within seconds. Her hands clutched his shirt and it only took a few seconds to realize she wasn’t fighting him like he thought she might, but was clinging to him, her tongue tangling with his own, little mewling noises escaping her throat and making the incessant throbbing in his groin more profound.
She pulled away after long moments, panting for breath, and those amber eyes he’d admired the first time he saw her were shining with something he hadn’t seen directed at him since the night he’d spent with her in Missoula.
Lust. Desire.
Her arms were around his neck in the next instant, her mouth so hot and wet against his own. Holden wrapped her in his arms, pulled her into his body and took everything he wanted from that kiss. Deepened it until he had trouble breathing past his need for her.
She took a step backwards and pulled him into her room, the door kicked shut without ever breaking contact with his mouth.
He turned her, braced her back against the door, his fingers moving into those luscious locks of hair and he was hard and aching by the time she pulled back for air. Her eyes glistened. Her lips wet and swollen and it took everything in him not to guide her to the bed and have his way with her.
Laurel inhaled a few deep breaths and blinked lazily at him. “I didn’t want anyone to see us on the stoop.” Her hands slid away from his shoulders to rest on his chest. “If anyone caught you in here, I would lose my job.”
“I won’t let that happen.” She blinked up lazily at him, licked her lips and sent his thoughts racing in directions they shouldn’t have. “I didn’t come back to invite myself to your bed so your position as school teacher is safe.”
She nodded, her gaze lowering to his chest briefly. “And why did you come back?”
He grinned and put a finger under her chin, lifting her head so he could see her. “Because I wanted a kiss. I thought that was obvious.” Even though the room was bathed in shadows, he could see her cheeks redden.
“Is that all you wanted?”
He laughed. “Not by a long shot, darlin’, but I’m a patient man. I can wait.”
She smiled up at him, lifted up on her toes and kissed him again, this time without the frenzy of hurried motions. It was soft, lingering and he cursed his neglected groin for demanding so much attention and distracting him. When she broke the kiss, her lips swollen from his kiss, he knew being a gentleman would be harder than he thought it would. Especially when she whispered, “Make love to me.” 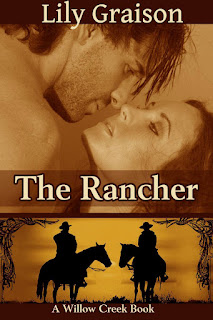 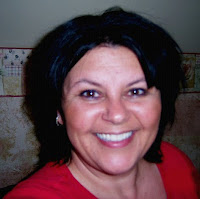