Destined Hearts was originally released in 2007 by Alinar Publishing. I wrote it back in 2003 and it was the first ‘original’ fiction I ever wrote.

Like most new authors, I made all the “newbie” mistakes we eventually learn to not do and despite seeing them in this novel, this story will always be special.

I removed it from all retail sites in 2012 and wasn’t sure what to do with it. I don’t think it’s up to the same ‘standards’ as my writing now but the ‘story’ is good and it would be a shame if no one ever got to read it again. So…I’m going to release it here as a newsletter subscriber exclusive.

This story is a full length, 73,000-word contemporary romance, that explores the possibility of souls mates, reincarnation, and the risks one takes for a second chance at love. 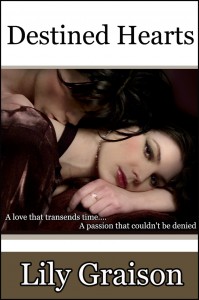 Caitlyn Edwards has always lived her life between two worlds. One…in the hustle and bustle of modern day Boston, where she spends her days taking care of her widowed father and helping him run their small auto repair shop. The other…in the arms of a man she only sees in her dreams. Her nights are filled with promises of a love so passionate, she’s spent the last fifteen years trying to find out who he is.

To access this story, you’ll need to be a subscriber to Lily’s Newsletter. If you’ve not signed up, you can do so HERE.