By Lily Graison | November 18, 2012 - |November 18, 2012 Books
I have a special treat this week. The lovely Eden Summer’s is here to debut her brand new book, Sneaking A Peek. Help me in welcoming her here to the blog and read about her journey to publication. 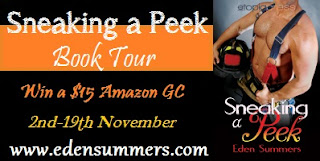 Taking the plunge into the great unknown and becoming a writer was so far out of left field that my own subconscious suffered whiplash. I’d never aspired to be an author. In high school I hated English. It bored me to death, so I spent a lot of time looking out the window daydreaming.

I’ve always been a dreamer, a hopeless romantic and someone who can simply sit in silence and be entertained by their own thoughts.

It wasn’t until I had my first child that I became an avid reader, and a few years later decided to put one of the bazillion story ideas in my head, onto paper. Then things took off at warp speed. I entered an RWA competition a month after I started writing and while waiting for the results I studied the craft. I joined RWA Australia and my brain became bombarded with rules and guidelines I never knew before.

“Learn how to write in deep point-of-view.”

“Don’t let your friends be your critique partners.”

There was so much to learn and I began to read more critically too. My major problem though, was sticking to one project. I would start a story but become discouraged half way. Suddenly a huge brick wall would plaster itself in front of me and I couldn’t finish what I was writing.

It wasn’t until December 2011, that I became completely fed up with starting projects and not finishing them. I was a plotter, I would spend days plotting entire stories that I never finished. So one lonely night in December I decided to start writing and not stop until I wrote ‘The End’. And that’s what I did. Even when I wanted to stop, I didn’t  Even when I had a better idea, I kept it in my mind and wouldn’t allow myself to waver from the task at hand.

Six months later I finished Concealed Desire – a contemporary romance novel. Because of the story length (55k) it wasn’t suited to the big publishers and I only ended up submitting the story to two editors.

Lucky for me, one of those editors (the divine Rachel Firasek) loved the piece and I was offered a contract through Etopia Press. Since then I’ve finished two more short stories (Phantom Pleasure – released in the Halloween Heat V Menage anthology, October 5th) and my most recent release, Sneaking a Peek.

I’ve been blessed with a very quick road to publication and I attribute a lot of that to my support team. It took a while, but I now have the best group of critique partners and cheerleaders. Without them, none of my stories would have reached ‘The End’. 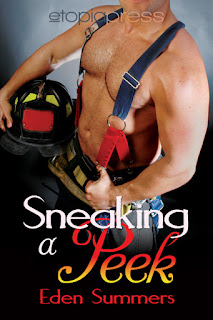 She’s either headed for jail…or for the best sex of her life.

Tarney Jensen has been crushing on sexy firefighter Ethan Reid, her best friend’s brother, since her sixteenth birthday. She knows acting on her attraction will ruin their friendship, but she can’t fight the temptation of his sweat-slicked skin as he works out. Every hot-blooded woman loves to drool over a sexy piece of man flesh, but watching one from the shadows of your porch when he has no idea you’re spying on him? Totally illegal.

For years Ethan has watched men go in and out of Tarney’s life, but how’s a guy supposed to put the moves on his kid sister’s best friend without looking like a perv? But when Tarney lets out an ear-piercing scream from her front yard, Ethan drops everything to rush to her aid. And finds out that the woman of his dreams has been sneaking a peek at his workouts…

Read an excerpt and Purchase Sneaking A Peek at the following retailers:
Amazon
All Romance eBooks
Barnes and Noble

Eden is hosting a Giveaway as part of her Blog Tour. Enter below for your chance to win a $15 Amazon gift cards and/or 5 swag packs

Thank you Eden for stopping by the blog. It was a pleasure to have you!
All material &copy2005-2012 to Lily Graison
Bookmark the permalink.