By Lily Graison | December 6, 2011 - |December 6, 2011 Books
Since we’re only a few weeks from Christmas, how about a teaser from one of my Holiday Romance’s? This is from Blame It On the Mistletoe, a contemporary romance set in snowy mountains of Ashville NC. 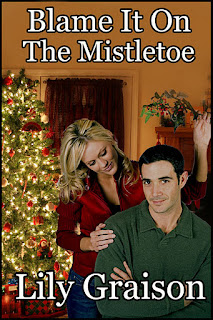 When Macy Carter’s parents order her to bring her live-in boyfriend Sean home with her for Christmas she has no idea that her little white lie is just about to snowball into a fabrication of monstrous proportions. Sean isn’t her boyfriend, he’s her boss. Now she has to reveal the lie she’s been telling her family for the past two years or hastily concoct an elaborate ruse to fool them instead.

When Macy tells Sean Mathis of her predicament he does what any gentleman would – he laughs and then agrees to help her out. Little does he know that one misplaced word in their little scheme will backfire and land them both in the hot-seat.

Secluded in the mountains, surrounded by snow and good will, Sean and Macy can’t help looking like the perfect couple. So perfect that the family decides a Christmas wedding will make it a holiday none of them would ever forget!

He was watching her while her brothers talked his ear off. The look on his face caused a shiver to race up her spine. His gaze roamed the length of her body and heated her skin from across the room. He took a drink of his wine, his eyes locking with hers over the rim of the glass. A tiny smile lifted of corner of his mouth when he lowered the goblet and if she didn’t know any better she would swear he was thinking naughty things about her.

Macy took a gulp of her own wine, trying to get her overactive imagination to take a backseat. She’d wanted Sean for longer than she could remember and having him look at her like he wanted her in return was too much. It caused things low in her belly to clench. Her breasts tingled, aching for his touch, and heat ran laps over her limbs.

Her pulse was racing all of a sudden and she found it hard to breathe. She emptied her glass and turned, walking to the kitchen to refill it, emptying it at once before refilling it again. Her head was swimming by the time she made her way back to the living room. Her gaze immediately sought out Sean. He wasn’t there.

A slight noise behind her caused her to turn her head. Sean was walking down the hall toward her. She saw him glance up above her head and she followed his line of sight. Her heart skipped a beat when she saw the mistletoe directly overhead. Lowering her gaze, she watched him stalk the hall. By the time he reached her, her body was humming with anticipation.

He never said a word, just lowered his head and took her lips in a hard, demanding kiss. His tongue slipped into her mouth and she wasn’t sure who moaned the loudest, her or him. Long minutes with the taste of him overpowering her senses and she knew the wine was a bad idea. She just wished she could care. At the moment the only thing that mattered was Sean and his urgent kisses. The way his fingers tangled in her hair and held her to him. The noise in the room vanished, the only sound she heard was her heart beating out a frantic tattoo against her ribs.

When Sean pulled away, his hot breath teasing her lips with the promise of more, she opened her eyes to look at him. “I’ve had too much to drink,” he said. His gaze skimmed her face, stopping once he reached her lips. “My thoughts keep running away with me.”

“What are you thinking?” Macy held her breath and waited for his answer.

“I’m thinking I’m tired of pretending we’re a happy couple.” Macy couldn’t have been more hurt if he’d slapped her. She tensed, waiting for the next blow, and steeled her heart for the pain to follow. “I want you,” he said.

Macy blinked. He wanted her?

She opened her mouth to say something—what, she had no clue—but she couldn’t utter a word. She stared at him, feeling the heat of his body pressed against her own and took a steadying breath and forced the words to come. “What are you trying to say, Sean?”

“I’m trying to say that I want you. Now.” His fingers skimmed her jaw, his lips sliding softly across her own. “Come to bed with me.”

Macy had to force herself to breathe. The wine she’d consumed had already fogged her mind enough to make standing without teetering to one side harder than it should be. Sean’s sensual kisses hadn’t helped her feelings of vertigo and now, his little confession left her weak kneed and feeling flushed.

The rational side of her brain told her this was a bad idea, that they were drunk, but the other side, the side that had secretly wanted this man for longer than she cared to remember, was jumping with joy. He wanted her, just as she’d wanted him. But what happened in the morning? Next week when they were back at work and their little lie was no longer an issue? Would he regret it? Would she?

She would worry about that later. Blame it on the mistletoe, or maybe the wine, but whatever the reason, Sean wanted her. And she wanted him.

The what-ifs lasted as long as it took her to climb the stairs, Sean’s hand firmly in hers. Once behind her closed bedroom door, nothing else seemed to matter.