By Lily Graison | October 16, 2012 - |October 16, 2012 Books
I’ve been re-reading The Gathering, book #2 in the Night Breeds Series, in an attempt to get it re-proofed for print and reading my books always leads to me wanting to share so I’ll be starting up my Tuesday Teasers for a while. Today, I have a small scene from the end of the book, when our heroine, Rayna, is faced with the possibility of seeing her friends killed. 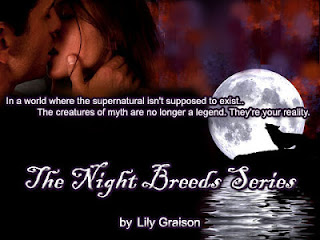 Rayna was led up the stairs behind Carmen to the front of the stage. There, she gazed out at the sea of faces staring back at her. Shouts and disembodied voices yelled her name, the applause rang out over the park and for once, she wished she’d chosen a career path that didn’t allow her to be so visible to the public.
When Victor took center stage, Rayna watched him smile, his gnarled fingers wrapped around his cane as he stood and waited for the last of the applause to die. When the people staring up at them were silent, Victor gave her a brief look and the malice in his eyes caused a shiver to race up her spine.

“I’m sure I don’t have to introduce this lovely young lady to you but for those who don’t know, this is Rayna Ford.” He turned his body toward her and the shouts once again rang out over the park. “We’ve come today to share with you something that will change the world. Rayna has graciously offered to be the one to enlighten you all.”
He turned to face her and held out his hand. “Ms. Ford, if you would be so kind.”
Rayna glared at him before turning her attention to the crowd. She watched their eager faces as they stared up at her. So many of them looked familiar. Old acquaintances and friends lined the front of the stage, all of them waiting for her to enlighten them, as Victor had said, and the only thing she could think to say was, “run!”
When Victor gave her a disgruntled look and shook his hand at her impatiently, she heaved a sigh and crossed the stage to where he stood.

She scanned the crowd, wondering what would happen to those friends she saw once the wolf was loose. She knew enough from what Judith told her to know that once she turned, the wolf would act instinctively. It would hunt and with this many people, it was a sure bet someone would get hurt. All those people staring up at her would be nothing but food once she shifted. The wolf would see them as nothing else.

Sequel to, The Calling

THE CALLING changed Rayna Ford’s life forever, now in THE GATHERING, she will find out what she’s truly become.

Rayna Ford didn’t believe in monsters, until she became one herself.

As a newly turned werewolf awaiting her first shift, Rayna puts all her trust in Garrett Kincaid, the man who accidentally infected her and changed her life forever. But when old enemies resurface and take her from the one man who vowed to protect her, Rayna must face her fears alone.

The Collective, the Breed leaders of all the preternatural species, haven’t abandoned the dream of announcing their presence to the world and they still want Rayna to be the one who integrate them into human society. Her only chance at survival is to reveal the secret the breed leaders want her to show the world, but in doing so, she may alienate the very creatures she wants to protect and endanger her own life in the process.