By Lily Graison | February 7, 2012 - |February 7, 2012 Books
Welcome again to Tuesday Teasers! I have a small excerpt from Wicked: Leather and Lace today, which is book 2 in the Wicked Series. This scene takes place on a crowded dance floor and rock star Luke Harris doesn’t like taking no for an answer! 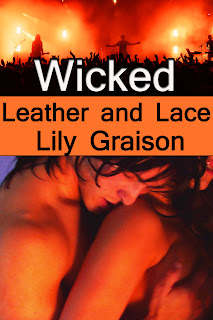 Roxy Carlisle is on a mission. She’s been in lust with Luke Harris, lead guitarist for the band Wicked, for two years. When her best friend, Holly, hooks up with the bands lead singer, and asks her to tag along to New York with her to meet the band, Roxy couldn’t pack her bags fast enough. The chance to meet Luke in person was a dream come true. Even better if her ultimate fantasy of finding herself in his bed were to happen. One way or another, she was determined to have him. That is, if Holly’s hair-brained idea of playing hard to get doesn’t backfire in her face.

Luke Harris loves women and they love him. All he ever has to do is speak to them and they fall all over themselves to be the lucky lady of the night. That all changes though when a feisty brunette comes barreling into his life and changes all the rules. She’s immune to his usual charm, or so it seems, but something in her eyes tells him otherwise.

Has Luke finally met a woman he can’t seduce? Can Roxy follow her plan and not give in when Luke sets his sights on her? When sex is all you’re after, can you walk away when your heart demands more?

Excerpt
“Okay, maybe I didn’t make my self clear,” he said, cradling her body in his arms.

He nuzzled the side of her neck and Roxy felt light headed. He ground his hips into her backside and she was pleasantly surprised to find him excited. The obvious bulge pushing into her butt caused her knees to go weak.

“About you coming back to the hotel with me,” he rasped in her ear.

“Oh, I’ll definitely go back. I’m staying there too.”

Roxy laughed. “Only if you’re a good boy.”

“Oh, I can be very good,” Luke promised, leaning down to brush a kiss on the side of her neck. Roxy’s eyes closed when he placed a series of warm, wet kisses to her skin and shivered at the feel of his tongue stroking her flesh. “It’ll be an experience you’ll never forget.”

“I’m sure it will,” she whispered.

He kept a firm grip on her waist but lowered one hand, skimming her hip before reaching the edge of her skirt. His fingers danced along her thigh, light, gentle strokes teasing her flesh. They swayed to the music, Luke’s breath warm against her skin and Roxy raised her arm, wrapping it around his neck and closing her eyes. She lost herself in the feel of him. The warmth of his body ignited her senses and his free hand roamed her flesh until goose bumps pimpled her skin.

She opened her eyes when she felt his fingers brush against the front of her panties and tried to control her breathing. She glanced around at the other dancers, looking to see if anyone was paying any attention to them, but to her amazement, no one was.

His probing fingers found the edge of the silk covering her and she gasped when one lone digit crawled under the edge of her panties.

“Someone’s a naughty girl,” he whispered in her ear, rubbing the soft bare skin between her legs. He gave her a brief, wicked smile before he captured her lips, forcing his tongue into her mouth.

Her body sagged against him. She drank in his kiss, letting him take what he wanted and she gasped when his curious fingers found her clit, rolling the small bundle of nerves in small circles.

He turned her suddenly, and ground his obvious erection into her hip. Reclaiming her lips, he crushed her to him, one large hand tangling into her hair and holding her to his hungry lips while the other did the most delicious things to her clit. It was more intense than any fantasy she’d ever had about him.

Luke Harris was definitely everything his image portrayed. He was sex. A walking orgasm just waiting for a place to happen. Seconds turned to minutes and Roxy broke the kiss with a gasp. She stared up into lust filled eyes and drank in the sight of it. His pale gray eyes had turned sparkling silver. Fire burned in his gaze and it was directed at her.

He placed a soft kiss on the side of her mouth, his tongue darting out to trace her bottom lip and she felt the small touch to the soles of her feet.

Oh god. Roxy took a shuddering breath and tried to think around her sex-addled brain. Sleep with him now and chances are she’d be yesterday’s rubbish. Continue with Holly’s plan and… and what? Prolong her misery? Leave her with another lonely night with nothing but her fantasies to keep her warm?

The hand between her legs was still there. His fingers burning a trail over her inner thigh and she could only imagine the heights this man would take her. Three minutes with his fingers buried in her panties and she was undone. What if she had all night?

Luke wanted her. He wanted her! How could she refuse? She’d done more stupid things in her life than she could count. This wouldn’t be one of them. She smiled up at him and said, “Lead the way.”

The smile he gave her made things low in her belly tighten with anticipation.

“Follow me,” he smiled, turning and leading her through the crowd toward the front door.

Roxy turned her head when Luke stopped and did the same. A man approached them wearing a suit that looked as expensive as the dress she’d splurged on. His hair was thinning on top and was sprinkled with gray. He looked to be in his late forties. He carried an air of authority around him and she knew whoever he was, he was important. She raised a curious brow at him before looking at Luke. From the look on his face, she could tell he didn’t like the man.

“The reporter I said was coming finally showed up. The other guys have already talked to him. It’s your turn.”

The man turned his attention to her briefly and Roxy couldn’t be sure, but she thought he rolled his eyes.

“No, it can’t. I promised the interviews and you agreed. Your friend can wait in line with the other groupies.”

Roxy’s mouth fell open. Groupie. Did she look like a groupie?

Luke glanced at her before saying, “Give me ten minutes, Curt, and I’ll be there with bells on.”

Ten minutes? Ten minutes! Oh hell no! She was not a no-tell motel for his cock.