Free Rock Star Romance! Wicked: Tempt Me Not by @LilyGraison

Book 1 in the Wicked Series, Wicked: Tempt Me Not, is now available for FREE at some participating retailers. See what reviewers are saying and read a excerpt below. 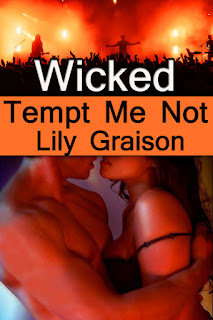 Wicked: Tempt Me Not – The Wicked Series, Book 1
by Lily Graison

Devin Shaw, front man for the band, Wicked, is forced into seclusion by his manager after his destructive behavior almost destroys the band. Sent to a remote cabin alone isn’t Devin’s idea of fun, but to save his career, he’ll do what it takes.

Holly Baker, escaping the hassles of her big city life, arrives in the mountains of Tennessee and awaits the arrival of her friend, Roxy, to start their two-week vacation. Their plans change drastically when Roxy is called away at the last minute, leaving Holly to fend for herself.

Devin and Holly’s worlds collide when a mix up strands them in the same cabin. Alone with nothing but each other for companionship, how will Holly react when she realizes she’s trapped with none other than the hottest lead singer the country has seen in years? Will Devin be able to work with a constant distraction the pretty brunette offers? Or will the two discover that sometimes temptation is a wicked dessert best served hot!

What Reviewers are saying….

Holly held back a smile as she entered the cabin and heard Devin’s request. “Your arm broke?” she asked, raising one eyebrow as she looked at him.

“No,” Devin grinned. “I just know how bad you want to get your hands on me.”

Holly rolled her eyes and dropped his boots and shirt to the floor. “You are completely full of yourself, you know that?”

“You could be completely full of me too. Just say the word, kitten.”

She looked away when Devin grinned and rolled his tongue up under his teeth. Roxy had spent an entire hour discussing the things that tongue could probably reach and Holly felt her face flame as she remembered the conversation.

“I’m not at your beck and call, Devin. This is my cabin and I do as I please.”

He grinned at her when she walked to the kitchen. “But I can’t reach my back.”

Holly sighed before turning to look at him. He was giving her puppy dog eyes and was he pouting? Oh pouty lip. Snapping out of her musings, Holly sighed dramatically for effect before rolling her eyes. “You’re going to owe me big time for this.”

“Anything you want, gorgeous,” Devin grinned before raking his eyes over her form.

Taking a deep breath, she tried to clear all the naughty thoughts of Devin from her mind.

She walked to the couch and took the bottle of lotion from him. “Turn around.” A wide smile curved his lips
and she held back a smile as she removed the cap from the bottle. Squeezing out a small amount of the lotion, Holly took a deep breath before looking at his back.

“There’s nothing on your back, Devin.”

“Uh, no there’s not,” Holly told him as she looked at his perfect skin. “Not one little blemish.”

“Well it itches like crazy,” Devin said, reaching around and gave what he could reach a scratch. He probably needs a bath.

She recapped the bottle and tossed it on the couch. “Well, there’s no rash,” she told him as she turned and walked back to the kitchen to wash her hands. She heard him sigh as she turned the water on and she spared him a glance. He was still scratching and at this rate, he’d have some nasty infection by nightfall.
Closing her eyes, she tried to calm her breathing. Could she really help him bathe? If you were dirty and miserable, you’d want help, wouldn’t you?

Opening her eyes, she turned the water off and dried her hands. “Fine,” she said, “but I swear, if you try anything funny, I’ll drown you where you stand.”

His eyes lit up before he smiled.

“And you’ll bathe with your pants on.”

“What? How am I supposed to get clean like that?”

“You’re not itching anywhere but where you were laying in the grass, and you had your pants on, so they stay. Take it or leave it.”

This is the worst idea in history.

Holly tried not to look at Devin as she adjusted the water temperature. He was leaning against the wall, watching her. Her heart felt ready to burst from her chest any minute and a lump had formed in her throat.
What in the world was she doing!

Turning her head, she locked eyes with him. Her cheeks burned hot instantly.

His arms were crossed over his chest. That irritating smirk was firmly planted on his face and he looked like the cat that ate the canary. He’d won. Just like that. He’d won.

Holly almost growled in frustration but looked away instead. She tested the water again and busied herself removing her shoes and socks. She’d have to get in with him at some point. Inhaling deeply, she turned to him, and crossed the room. She avoided his eyes, wrapping her arm around his waist, and helping him to the shower.

It took careful manoeuvring to get him over the lip of the shower and not have him face down in the water. Who knew one sprained ankle could cause so much trouble?

He stumbled, grabbed for the wall with his free hand, and dragged her under the water with the other.
She yelled while spitting and sputtering. “Devin!”

“It was an accident!”

She looked up at him, pushing her wet hair out of her face. She could tell by the look in his eyes that it wasn’t. When he smiled, she wanted to drown him. Snatching the soap from the shelf, Holly held it out to him.

“And I’m suppose to do that with one hand, how?”

Holly grinned. “I’m sure you’re used to using one hand for many activities. This is no different.”

He laughed and took the soap. “Are you going to watch?” he asked, turning the bar in his palm a few times while holding it under the spray of water. “I’m not particular in my kinks.”

“Obviously,” she said, biting her cheek. She busied herself looking at anything but him or how the water ran over his back. It ran in small rivers across his shoulders, cascading down his spine and disappearing into the fabric of his jeans. What she wouldn’t give to see what those blasted pants hid again.

She shook her head, steering that train of thought away. No need to go there. Especially now.
Hearing him say her name, she turned her head to him.

“Care to get my back? Or am I supposed to do that myself too?”

She wanted to say yes just to save her the embarrassment, but knew she couldn’t. Even she couldn’t get her back without difficulty and that was with both feet planted on the floor. He was bracing all his weight on one foot. He’d fall for sure.

Taking the soap, she pushed his shoulder, trying to get him to turn around. There was no way she could do this with him looking. When he faced the shower wall, she took a deep breath and raised her hand.
The soap glided across his skin, leaving a trail of bubbles in its wake. His skin was smooth and tanned to a warm golden bronze. Her other hand rose without much thought, her fingers working over his back in slow, measured movements.

He dropped his head, palms flat on the wall in front of him. The water ran over his neck and down his back, washing the soapsuds away.

Holly continued her pursuit, her gaze drinking him in while her hands rounded over every contour. He was warm, his skin soft, and every muscle she felt firm and tight.

She bit her lip, mesmerized, watching her hands manipulate his flesh. He suddenly straightened and turned his body, putting his back to the wall.

He locked eyes with her. There was so much heat in his gaze, it made things low in her belly tighten. He reached out, grabbing her arm just above the elbow and pulled her forward. Her pulse quickened when he guided her arm to his stomach, moving her hand in slow, long circles over his flesh. She swallowed the sudden lump in her throat and watched his face as he stared at her.

His voice was soft, a barely there whisper over the sound of the water. His lips were parted, his tongue escaping to moisten them when she moved her hand. He shuddered a breath when she did. The look on his face was her undoing. She was barely touching him but she felt the way his body trembled under her slight touch. She knew where this would lead. He’d been hinting at it for days now. Is it what she wanted? Really?
“You’re thinking too much,” he said.

Holly took a deep breath and looked at all the delicious flesh under her hand. This was Devin Shaw. A man hundreds of women would give anything to have and here he was, standing naked from the waist up asking her to touch him.

She closed her eyes, trying to think, and felt him move closer. The hand on her arm moved, trailing over her shoulder to cup the side of her neck. His breath tickled her cheek and she drowned in his scent.

She looked up at him then. He was so close. One simple tilt of her head and she’d be able to taste him. She’d be a fool not to take what he offered. Lord knew she wanted him. Who didn’t? She’d never thrown her reservation away so quickly before but the look on his face melted her to the core. This man wanted her. Even if it was just sex, he still wanted her. Devin Shaw wanted her.