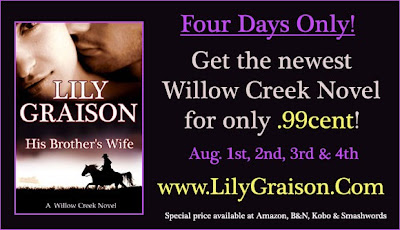 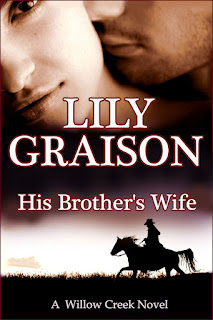 His Brother’s Wife – A Willow Creek Novel
by Lily Graison

When Grace Kingston accepts a wedding proposal through a mail-order bride agency and travels across country to be married, she has no idea her bridegroom is a fourteen-year-old boy. There’s no way she can accept his offer but with depleted funds, and winter coming on, Grace has little choice but to stay. Things go from bad to worse when she meets Jesse’s older brother,

Rafe. The attraction is immediate. He’s surly, rude and downright pig-headed but he makes her pulse race with a single glance.
Rafe Samuels thought to teach his brother a lesson by making him take responsibility for his rash behavior but one look at Grace and his plans go up in smoke. She isn’t the dowdy spinster he imagined and having her live in his house and not be able to have her is the worst kind of torment. But putting her out of his mind is impossible.

As fall turns to winter, Grace finds that living with the two brothers isn’t as simple a thing as she once thought. Jesse still thinks marriage is in the cards, and Rafe is a devilishly handsome distraction she doesn’t need. She can’t decide if he hates her or wants to kiss her. And how does she avoid breaking Jess’s heart when it becomes clear that the attraction between her and Rafe is mutual

*Special price not available at all outlets*