Today’s Tuesday Teaser comes from my first ‘ever’ published book, A Touch of Heaven. This novella was originally released by Linden Bay Romance back in 2005 and Re-released in 2010 through Alinar Publishing. 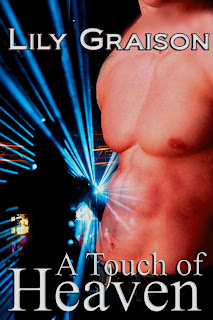 Paige Foster planned the perfect get-together for her best friends from high school in honor of their ten-year class reunion but her plans go up in smoke when an impromptu trip to The Pleasure Dome, an elite club that features the hottest male dancers in the country, ends up on their to-do list. Forced into going, she complains until she meets Simon—the main attraction.

“Mind if I join you?” he asked, walking in and forcing Paige to take a step back.

Paige was too shocked by his move to say a word when he walked into the bathroom with her and shut the door behind him. The small space was barely big enough for one person, let alone two, and she inhaled deeply when her back came into contact with the wall.

She stared up at him, nervously looking around the bathroom, already knowing there wasn’t an escape, before she looked back at Simon.

“So,” Simon said, leaning against the door. “Looks like my otherwise disastrous day just took a detour.”

Small talk. She could do small talk. It was the hands and the lips part she couldn‘t help but be nervous about. She smiled slightly before saying, “Oh?” Her hands nervously toyed with the hem of her blouse. “Bad day?” Completely lame.

“Not yet, but it will be in a couple more hours.”

God he has the bluest eyes. “Oh, well maybe it won’t. Stranger things have happened.”

“Suppose you’re right,” Simon said, pushing off the door and taking a step toward her. “Like running into you again.”

Paige grinned as he smiled down at her, his eyes roaming over her body. The tingles that had been running up her spine every time she thought of him exploded as her thoughts traveled back to the night before.

Her heart was beginning to pound in her chest and she briefly wondered what he would do if she just grabbed him and had her wicked way with him like she wanted to.

She didn’t have time to find out, unfortunately. He spoke and broke her train of thought.

“So, tell me gorgeous, why’d you run off last night?” He closed the distance between them and placed one hand flat against the wall beside of her head. The other came to rest on her waist and the small contact caught her breath in her throat.

Paige started to explain but when Simon raised his hand from her waist and ran his finger down her neck, her throat seemed to tighten, stealing her words. Her eyes closed an instant later and nothing registered but his fingers trailing over her skin and the way he smelled. A heady mix of cologne, cigarette smoke and something she knew was just him, surrounded her.

He lightly brushed his fingers over the exposed skin of her neck before running them up over her shoulder, his fingers a barely there whisper against her skin. He brushed the small spaghetti strap of her top off her shoulder and Paige gasped softly when he leaned down and she felt his lips sweep across her shoulder.

The small tingling sensations she’d been having every time she thought of him spread like wild fire as hot, wet kisses ran over her shoulder and up her neck.

“Simon,” she whispered, unconsciously leaning her head to the side. Her eyes remained shut and she tried to breathe without gasping for air.

“What…what are you doing?” she asked him softly, a small moan escaping her throat when his tongue ran up the side of her neck to her ear. She was at a loss as to what to do. Her friends were waiting for her but here he was, the man she had spent a restless night thinking about.

“I’m kissing you,” he whispered in her ear before sucking her earlobe into his mouth.

“Oh,” was all Paige managed to say. The throbbing sensations between her legs pounded with each bruising beat of her heart as it slammed against her rib cage. All she wanted in that moment was to feel his hands on her body, to feel his arms around her and to drown in his kisses.

He licked around the shell of her ear before he brought the hand he had braced on the wall down and laying it on her arm. His fingers slid over her skin, his touch feather soft. He grazed her hip, not stopping until he reached the edge of her skirt.

“Do you have any idea how I felt last night when I came back and found you gone? I wasn’t any where near finished with you.”

Paige made a small whining noise at his words and heard him chuckle. The feel of his hand tracing the skin just below her skirt was almost unbearable. Of course, the minute he slipped under the fabric, his fingers crawling slowly up her inner thigh, she nearly cried out.

How did he turn her into a whimpering mess with just a few touches?

His voice broke with huskiness, the wonderful sound sending shivers up her spine. “Just thinking about you drives me crazy. I’ve wanted nothing since the first moment I ever laid eyes on you, than to worship you. To taste every inch of your body one delicious lick at a time.”

Paige licked her lips, finding them suddenly dry as she listened to him. She tried to breath without gasping for air at his words. His fingers slowly climbed up the length of her thigh, his fingertips brushing the silk of her panties and traced light circles over the front of them.