Today’s Tuesday teaser comes from my Contemporary Romance novel, DESTINED HEARTS. This is the first original story I ever tried my hand at so it’s a bit special to me even though it wasn’t the first I had published. 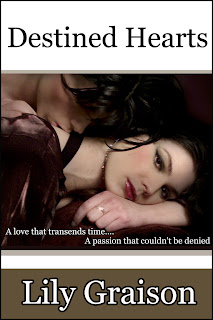 Caitlyn Edwards has always lived her life between two worlds. One…in the hustle and bustle of modern day Boston, the other…in the arms of a man she only sees in her dreams. Her nights are filled with promises of a love so passionate, she’s spent the last fifteen years trying to find out who he is.

Caitlyn looked at William over the rim of her wine glass. “Right here?” she asked, amused.

William grinned before sitting his glass down and standing. “Why not?”

Caitlyn stared up at him, taking in his smiling face and let out a tiny laugh. “Okay, but only if the band will play something else. I can’t dance to this.”

William winked at her before running to the car and leaning into the open window. The sound of static reached her ears when he changed the radio station and the music switched from classical to hip-hop before it would move to something else.

This wasn’t exactly what she expected when William asked her to dinner, but Caitlyn hadn’t stop smiling since they’d arrived.

The drive through the country had been relaxing and gave them time to talk. She’d learned of William’s role at Davenport Industries and of his plans to start his own company.

He wasn’t anything like she’d imagined. The refined businessman persona he projected was just that. Outside appearances told of a man quite different from the one most had a chance to see. His penchant for 80’s music and sappy romance novels reaffirmed the old saying…you can’t judge a book by its cover.

The spot he’d picked for their picnic looked like something from a fairy tale. A pond sat nestled between flowering trees. Their branches swayed in the light breeze and showered them with pink and white buds.
Birds sang and the sun streaked through the canopied treetops, casting beams of light around them. The area was beautiful. Caitlyn was still amazed William thought of this instead of something flashier.

The food he’d brought looked like a 5-star restaurant had prepared it. Gourmet sandwiches, a variety of cheeses, fruits and bite-sized desserts graced the blanket they sat on.

Caitlyn sipped at the wine William had poured for her and glanced at the pond. A family of ducks splashed off the shore. Their joyful squawks mingled with the birds singing in the trees. The entire area was in a word…breathtaking.

Hearing the familiar tune of one of her favorite bands, she turned her head to look back at William.

“You can never go wrong with these guys,” William said, pulling his head from the car window and straightening.

Caitlyn grinned at the look on his face when he walked back to where she sat. He extended his arm to her and she sat her glass down before reaching up for his outstretched hand.

She stood, the butterflies in her stomach she’d won control over once again taking flight. She didn’t understand why William made her feel like a teenage girl with just a glance. She looked at him and felt almost juvenile.

The music coming from his car radio sounded like a soft hum in the background. Caitlyn took a step toward him, raising her free hand and placing it on his shoulder. He pulled her to him, tucking their joined hands in to his chest. The moment his other arm wrapped around her waist, a sense of familiarity overwhelmed her.

She had been here before, in his arms. Her dreams were now real.

Caitlyn inhaled, taking in his scent. Rich spices and soap overwhelmed her senses. Their bodies were close, almost touching, and the heat scorched her through her clothes. The music drifted over the area like a soft breeze and she smiled as they swayed to the music.

William’s breath rustled the hair by her ear, the warmth spreading through her body and wrapping around her like a glove. His fingers on her lower back ghosted across the thin fabric of her dress and he tightened his hold on her, pulling her flush against him.

She didn’t ever want to leave his arms.

Caitlyn raised her head. The intense look in his eyes that she’d seen many times in her dreams caused her pulse to quicken. “I know,” she said.

William stared at her before a slow smile curved his lips. “You’re going to do wonder’s for my ego if a simple dance gets this sort of reaction from you.”

She laughed, ducking her head. “You make me nervous. The trembling is involuntary.”

“And why do I make you so nervous?”

“You just do,” she answered, not wanting to tell him the real reason. He’d think her crazy if she told him she dreamed of him.

“Well, I suppose kissing you is out of the question then?”

His voice was deep and sensual and caressed her flesh like soft velvet. Caitlyn looked back up at him. There was a subtle seductiveness in his gaze and the tremble in her limbs increased. His hand on her back lifted to her face, pushing stray tendrils of hair from her eyes before his fingers warmed the skin of her cheek.

Caitlyn waited for the kiss she knew was coming. She saw it in his eyes seconds before he lowered his head.
His lips brushed her mouth like a silken whisper, caressing it more than kissing. Soft gentle strokes, the warmth of his breath teasing her lips apart. The moist sweep of his tongue darting inside to explore the contours of her mouth caused her body to slack against him.

Images of them together filled her mind. A small glimpse…portraits from the past she’d seen in dreams but felt as real as this moment did.

Her stomach flipped; the butterflies dancing in erratic patterns stealing her breath before the contact was gone. She stood there, trying to fill her lungs of stolen air and opened her eyes.

William was staring at her. His breath hot against her moist lips, his fingers running through her hair and Caitlyn could only gaze up at him.

The kiss, although barely there, had left her breathless. It lasted seconds but a lifetime of memories flooded her mind. She knew this man. There was no doubt now. She knew his body, his kisses, how his voice sounded as he made love to her and the trembles present before the kiss were now causing her knees to shake.

“I think I made it worse,” William chuckled.

“I think so.” They shared a laugh, Caitlyn burying her head in his chest. His arm once again moved to her back, the gentle caress of his fingers soothing and welcomed.