This week’s Tuesday teaser is another of my Holiday stories. I have an excerpt from THAT FIRST CHRISTMAS to share today so grab a warm cuppa and a cozy chair! 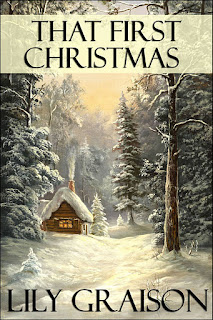 Meredith Gunter has always been Daddy’s little girl. Spoiled all her life, she’s never had to ask for anything and expects to get exactly what she wants. When she wrecks her car on the way home from college for Christmas break, she finds herself stranded on the mountain in the middle of a snowstorm, in a one-room cabin with a man she can’t help but want.

Travis Gregory has lived alone on the mountain for the last four years. He has little contact with the outside world and prefers it that way. When he spots a girl on the side of the road, his conscience won’t let him abandon her. The redhead captivates him instantly.

Worlds collide when Travis and Meredith try to co-exist in his one room cabin. Can they fight their growing attraction when the nights get longer and the storm isolates them from the rest of the world? Can two people, from such different worlds, ever truly be happy together?

It was almost dark when Travis stopped in front of the cabin door. He’d been avoiding it, and Meredith, all evening but knew he couldn’t hide out in his workshop all night. He needed to eat for one thing and Meredith would freeze to death if he didn’t get a decent fire going.

He sighed, laying his forehead against the cold wood of the door, and closed his eyes. No matter how long he’d been away or what he’d done, he could still see her, naked as the day she was born, and his body ached with the need to touch her. He didn’t know how many times he’d walked out of the workshop with full intentions of walking into the cabin, grabbing, and kissing her completely stupid. He’d made it as far as the front door only once, though.

His body had hummed with barely contained lust. The urge to cover her body with his and thrust into that soft flesh made his bones ache. It had been too long. He knew that now. He’d never wanted anyone the way he wanted Meredith but he wasn’t at all sure it was just his abstinence that was causing it. She’d gotten under his skin in less than a day. Her carefree attitude and quirky ways were endearing. She was like a breath of fresh air that he’d been denied. She made him feel…alive. Something he hadn’t felt in some time.

But she’s so young, he thought. And her father is Willis Gunter. He grimaced at the thought. Of all the girls to stumble onto his mountain. What were the odds? It had to be a cruel twist of fate. Or a complete set up. Had the old man found a way to repay him at last? Did he send his beautiful daughter up to tempt him, to dangle her sweet ass in front of him, and then snatch her away?

“That’s ridiculous,” he said to himself. “You’re thinking too much.”

Shaking away the thoughts and not being able to put off the enviable any longer, he opened the door and went inside. He was stunned at what he saw.

He looked around the room, at the tree, and then, at her. She was standing by the fireplace, nibbling on her bottom lip with an uncertain look on her face.

He glanced back at the tree and smiled. “It looks perfect,” he said, said. And it was. She smiled at him then and it nearly staggered him.

She clapped her hands excitedly and immediately walked to the tree. “I only used your oldest magazines for the ornaments so don’t get your boxers in a twist,” she said. “Do we need more?”

He shook his head, amazed. “No,” he said, crossing the room and looking at the ornaments she’d made. Origami angels, birds and flowers graced the branches; the pages from the magazines she’d used were bright and colorful. She’d made dozens of them, scattering them around the room and over the fireplace mantel. He picked one from the tree, looking at the intricate flower, and smiled.

“Where did you learn to make these?”

“One of my nannies taught me how,” she said. “After my mother died, daddy needed someone to look after me. We went through several nannies before we found Margaret. She was the only nanny who didn’t just tell me to go to my room and entertain myself. I think she actually liked me.”

“Your other nannies didn’t?”

She shrugged. “They seemed to…at first. I think they just liked my father’s money, though. My nannies were paid well.”

He made a sound deep in his throat, acknowledging her, and placed the paper flower back on the tree.

She turned then, walking to the sofa and picked up a larger paper ornament. It was a star. “I can’t reach the top,” she said. “Will you put it up?”

He nodded his head, watching her walk back across the room toward him. The look on her face made his pulse quicken and he swallowed heavily when she stopped in front of him. Only a breath separated them. She was so close he could smell the shampoo she’d washed her hair with. The scent of him on her skin from his clothes. He looked down at her, noticing for the first time what she was wearing. A pair of his boxers and a t-shit pulled tight against her body, molding around her curves. It was obvious she was sans bra. Her nipples were button tight and poking into the fabric.

The sight of her in his clothes draped so snug against her soft flesh made his cock twitch.

Her chest rose with every breath she took and his gaze traveled the length of her before settling on her face. Her lips glistened, the firelight casting a flicker of shimmers across them. He wanted nothing more than to taste them. To see if they felt as lush as they looked. When her tongue darted out, licking the full bottom lip, he closed his eyes.

She was killing him.