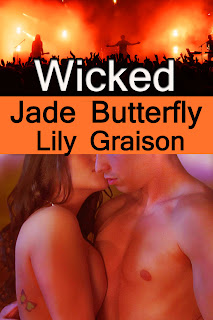 Christian Palmer, bass player for the band Wicked, isn’t your typical rocker. Much to his band mate’s amusement, he’s quiet, shy and looks like your average boy next door–but that’s all about to change. An encounter with a girl he can’t seem to forget calls for drastic measures and with the help of his friends, Christian goes from dud to stud in hopes to wow the girl of his dreams.

Jessi McClure has led a fairytale life. She has a job she loves, friends she can count on and couldn’t want for anything else. Until she meets, and photographs, an unlikely rock star. Running into him again was just dumb luck, but when their paths keep crossing, she can’t help but notice the change this shy, gorgeous guy has taken on and is drawn to him even more.

When fate keeps stepping in and hands you something you didn’t realize you wanted, do you throw the chance away or hold on with both hands? Will Jessi get more than she bargained for when the man she thought she knew turns out to be so much more? And can Christian hold on to the girl of his dreams when a misunderstanding threatens to tear them apart?

Jessi smiled at him again and he forgot to breathe. How could any man look at this woman and not want her? She probably has a boyfriend, he told himself, taking in her features. The plump fullness of her lips, the small uplifted nose and her soft tawny brown eyes reminded him of a Hollywood starlet. She definitely has a boyfriend. No one that gorgeous is single.

She shifted on her feet again and he knew she was getting ready to leave. The small hint of fear some girls got when he was speaking to them was shining brightly in her eyes. He wasn’t sure if it was him or something else causing it but if he was going to do this, it had to be quick.

He swallowed the humiliation his friends had thrown at him and cleared his throat again. “The guys have this game they like to play and I’m the unlucky participant of their fun tonight. I’ll spare you the horrible details so if you have a few minutes, just pretend I said the most outrageous thing you’ve ever heard.”

She raised an eyebrow at him and glanced across the club. He followed her gaze and groaned when the guys waved back at them.

“Yes,” he said. “They have a deck of cards with the most humiliating pick-up lines known to man. They get to pick the card and I have to find someone to say it to.”

“And you picked me to hit on?”

He grinned when she flashed him a devastating smile. It lit her entire face and made her eyes sparkle. It also made his already racing pulse nearly choke him as his blood pounded through his veins.

He pulled the card from his pocket and discreetly handed it to her so the guys wouldn’t see. When she looked down at it, reading the line, her soft, feminine giggle nearly brought him to his knees. It danced along his spine and caused visions of her wrapped in silk to caress his thoughts. For the first time ever, he wanted that damn card to actually do what it was supposed to. Entice someone to follow him back to his room.

When she glanced up at him, he sucked in a quiet breath. The clubs colored lights reflected off her hair and cast a halo of blues and greens around her. Her eyes sparkled in the light and a rosy hue tinted her cheeks. Beautiful didn’t even begin to describe her. She was the most glorious thing he’d ever seen.

“So, you’re supposed to read me the card and. what, exactly?”

He blushed. He felt it like a living thing crawl over his features and steal what little air he had in his lungs. “Well,” he said. He swallowed the sudden lump in his throat and glanced over his shoulder. The guys were still watching him. When he faced Jessi, he noticed her staring at the guys as well. “Um, normally. I mean, when I read the card, whoever I’ve read it to, usually laughs. and then invites herself back to my hotel.”

“Really?” Jessi said. She smiled and leaned her hip on the bar. “And how many girls have you seduced with one of these lame cards?”

“Me personally?” He grinned and felt his face burn hotter. “None. I don’t play this game unless I’m forced.”

“And why don’t I believe you?”

“Because Luke’s reputation rubs off on the rest of us?”

She laughed. “You’re probably right.” Glancing back down at the card, she read it again, smiling before handing it back to him. “Well, your still being watched,” she said, glancing over his shoulder to where the guys sat. “I guess you better do your duty and read this to me.”

He stared at her in shock, watching an amused twinkle shine brightly in her eyes before taking the card and reading it again himself. He cringed. She wanted him to read this to her? Out loud? He’d rather be tied to an anthill butt ass naked and covered in honey than read this card to her.

When she took a step closer to him and the scent of wild orchids filled the air, he suppressed a moan and licked his lips.

She smiled up at him, silently encouraging him. “They’re just words, Christian,” she said. “Read me the card. I promise not to bite.”

Something in her eyes told him she wanted him to read the card. She was watching him too intently. Eager anticipation shined in her eyes and he knew in that moment, he’d do anything the girl wanted no matter what the outcome.

Swallowing the nerves choking him, he glanced at the card and lifted his gaze to her face. “Fuck me if I’m wrong, but don’t you want to kiss me?”