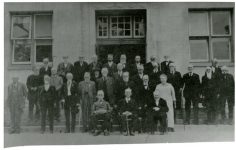 In the town I grew up in, there is a yearly event that everyone looks forward to and this week marks the 129th Soldiers Reunion Week. The Soldiers Reunion is (credited as) the longest-running patriotic celebration in the United States not based on an official holiday. The tradition began in the county seat town (Newton, NC in Catawba County) on July 4, 1889, when Civil War veterans answered a statewide call for recognition of their wartime service and to register for pensions. The gathering, then on Court Square, led to annual veterans’ reunions, starting the popular patriotic event then called Old Soldiers Reunion. The Catawba County Museum of History – which is located in the downtown 1924 courthouse – displays a patriotic exhibit of historic military displays all week and is free to the public. Events around town include a Classic Car Show on Courthouse Square on Sunday, outdoor concerts with street dances on Monday, Tuesday & Wednesday, a ‘patriotic’ baby parade, and a “Pet Mania” dog show. Then on Thursday, Reunion Day, downtown surrounding the 1924 circa courthouse, craft vendors, artists, craftsmen and food trucks line up around the square. A memorial service is held at 10 a.m. honoring veterans & members of patriotic organizations in the county who have died during the past year is followed by a Jazz concert and a fish fry at the American Legion for the counties veterans….then the fun begins! 4:00 p.m. marks the start of the mile-long parade around town, which gets bigger every year (last time I went it was over an hour and a half long). 8,000 – 10,000 people show up for the parade and if that wasn’t enough, afterward, there’s a seniors dance and more music. The week is finished with the (29th annual) Southern Biscuit Soldiers Reunion … Keep Reading! →

GIVEAWAY HAS ENDED CONGRATULATION TO THE WINNERS! I’ve never done a “year in review” post and I’d really hate to bore you with one this year but so much has happened over the course of the year, and so many unanswered questions still dangle in the air, I think one is needed. It’ll be brief, I promise, then we’ll get to the year-end giveaway. As some of you know, I’ve had health issues going back to the beginning of 2015. You can read all about that in this post if you don’t know what I’m talking about. Long story short, most of 2015 and 2016 were filled with medications and more sleep than any one body needs and my writing suffered for it. I’ve not had a new release in ages and Wild Horses has been promised for months now and it’s still not quite ready, which is why I decided to come off my meds. It’s been an eye-opener. Medications are meant to help but when they’re prescribed to hurry you out of the office, which I think they were in my case because no one EVER got to the bottom of my problem…just kept shoving pills at me…then they’re very harmful. I went from being depressed but functional to laying in bed in so much pain I could barely move and all the doctors and specialist could tell me was…sometimes our bodies just hurt for no reason. I’m sorry, but I don’t buy that so I just stopped going to those doctors and made the decision to come off the meds. I’d rather “live” with the pain than waste away in bed a shell of a person. I did research and found herbal supplements that might help and started weening myself off the drugs. I’ve been drug-free (except … Keep Reading! →

It is currently 27° outside but the sun is shining and the temperatures are ‘supposed’ to climb so… I’m doing what any sensible, “so-over winter” person would do…I’m running off to Myrtle Beach! It’s a girl’s weekend out (we’re leaving the men-folk at home) so I’ll be chilling by a heated (indoor) pool with my mom, sister, and niece until Sunday. I plan to work a bit too – or that’s the plan – so I’m taking the MacBook Air along to remind me I have things to do besides lots of shopping, although, Boardwalk at the Beach will not be missed! If you’re on Instagram follow me there as I’ll be posting pics from my weekend.

I mentioned on my Facebook page right after Thanksgiving that I was going to change my tree up this year. It’s been a very traditional looking tree for years and I very rarely deviate from my color scheme but this year, I saw something that made my inner child stand up and scream. Peacock Christmas ornaments!!   I love peacocks. I’ve been trying to get the Hubby to get me a few for years but they tend to ‘wander’ and we have a few wild dogs about. They wouldn’t last long in our yard. So, when I saw these decorations, I snapped them up and decided to bring the peacocks ‘inside’ the house. Most of the decorations are very fragile but so far, the grandbabies haven’t messed with them much. I found peacock feathers at A.C. Moore and have those inside the tree from top to bottom and I even found a peacock there I could use as a tree topper! Isn’t he gorgeous? And if everything wasn’t already perfect, as I was leaving the craft store, the lady who was making bows hung one as I was walking by. A big fancy thing made from peacock ribbon. It was meant to be! So, there’s my peacock tree. I’ll have a hard time taking this one down after Christmas. I LOVE looking at it and for once, I don’t mind it taking up so much space. Click on photo to see a larger verison

I was up at 6am again today. This is becoming a habit, I think, but it gives me time to reflect every morning, especially today when I have so much to be thankful for. My family is healthy and happy, I have great friends who fill my day with laughter and I have all my wonderful readers who inspire me daily. You’re the reason I get up every morning and ‘go to work’…the reason I’m still writing. Without you, what I do would be pointless, so Thank You for reading my stories and telling your friends about my books. Thank you for every review you’ve left, for every kind word on my Facebook and blog and most of all, Thank You for allowing me to continue doing what I do…create stories filled with families, love and happily ever afters. Happy Thanksgiving! Lily

Originally posted on the Alinar Publishing blog – Feb. 24, 2011 For the last year, I’ve been participating in a living history group, complete with 1800’s clothing. I even bought a new sewing machine and tried to make my own ‘southern bell’ dresses. Surprisingly, I managed to do that, quite successfully. I even made my daughter an 1800’s wedding dress. I find myself reading historical novels with a ‘new eye’ now. I know what’s correct and what isn’t and the situations I see those heroines in, knowing what they have on under their dresses sometimes make me lift a confused eyebrow wondering, ‘Did they just fall out of their corset?” It’s not possible most times to do the things they do while in that get-up but I love a great adventure so I ignore more often than not. Is there anything in a book you’ve read that made you think, “That’s not possible!”